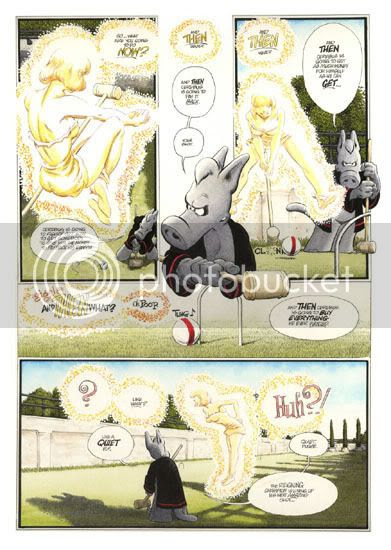 hello everyone this is a the first installment of a series on my current favourite comic books. in each of these segments I shall be examining one of my favourite less than mainstream titles.

this weeks subject Cerebus By Dave Sim and Gerhard.

Cerebus is the most ambitious self published comic book ever executed. Serialised from december of 1977 until march of 2004, it ran for a very much intended 300 issues. Most of which,with very few exceptions, were delivered on time. As would be expected from a sustained narrative of nearly 26 years the story is quite complex with many characters and topics. The book began as a humble silly animal conan parody and ended with philosophical eplorations of religion and existance. Along the way Sim exposed his less than noble Aardvark to many different facets of life. first that of a mercinary, than into the relm of politics, to an exploration of civilazations relation to orginaized religion, to dispair and death, to gender differances, on to the lonliness of midlife, and the good and bad of marriage, than on to an examination of western religions and finally old age and death. In other words an entire life. Not all aspects of the comic were entertaining, and the second half courted controversy with each issue.
One thing that has never been debated about cerebus is it's amazing art. Handled for the first 84 issues of so by Sim himself until he was joined by the Illustrator Gerhard whose backgrounds made the world of Cerebus much more real. Sim has a great power over drawing characters he has an amazing quality of line and his ability to handle expressions is superb. His layout could be a text book on comic composition on par with the scholarly writings of McCloud and Eisner. Sim also has a one of a kind skill with a facet of comics often overlooked by readers, the lettering. His lettering is largely why I hand letter my comics. from his artistic approaches to words to his choice of bubbles you feel as if you actually hear what is being said in the book. To round of the artistic side of things, after issue 84, is the background art of Gerhard. Sim is a quite compitent back ground artist, but no one else in the comics feild I believe is on paer with gerhard. His pen and ink drawing consists of fine crosshatching which gives it an engraving like finish which adds to the rustic style of the book It also gives a good solid grounding to Sims characters.
As for the stoyline It is too much to truly impart here but I shal give a breif overview. The comic is split into seven graphic novels and two "short" stories these are, Cerebus, High Society, Church and state (split into two volumes), Jaka's story, the "short" story Melmoth, Mothers and Daughters (Sub divided into the books Flight, Women, Reads, and Minds), Guys, the "Short" story Rick's story, Going Home (sub divided into the books Going Home and Form and Void) and Latter Days (Split into two volumes Latter Days and The last day). well first

Cerebus
This volume includes mostly episodic conan parody stories. it introduces many iportant characters such as the "love" of Cerebus' life Jaka. The second half also sets up the political sytem of Estarcion. it is a very funny book.

High Society
This is the first volume that Sim calls a Graphic Novel. This novel is largely about political power and the mishandling therof. It also sets up the recurring theme of ambitious women. In this Cerebus becomes the prime minister of the city stateof Iest. And finds himself trapped within beuraucracies eventually leaving the city state in ruin. This book is much better than mu explination sounds and is told in a humorous way.

Church and State.
This is the longest of the Cerebus novels consisting of two volumes of six hundered pages each and long claimed to be the longest serialized story arch in western comics history. South Estarcion is in political shambles from too much beuraucracy and an inabilty of the two major churches to make amends. With the growing threat of a Matriachal political sytem called Cirinism, the weilders of power choos to re install Crebus as a patsy Prime minister of Iest and later Pope of the western church. There plan goes teribbly wrong when Cerebus uses his power in a way thaey did not expect and he unwhillingly ushers in the Cirinist era. This novle also marks the first time Dave Sim explores reality as he sees it taking Cerebus into the rehlm of Philospohy. maybe not good Philosophy but Philosophy none the less.

Jaka's Story.
This is considered by many to be Sim's finest novel. in this unique combination of Comics and Illustrated prose. Sim explores the other members of the cast as Cerebus is living as a shell shocked house guest of Jaka and her husband Rick after the events of church and state. It contains Sim's first depiction of a literary figure in the form of Oscar, Based upon Oscar wilde. He also explores life under the cirinist matriarchy and the effects of peoples actions and the communication between people about them.

Melmoth.
The first of Sim's "Short" stories, allthough I find them to be more similar in structutre and leangth 200 pages to novels. Melmoth is a bizzar tale about the death of oscar wilde in the context of the world of estarcion. But it is the tale of the actual Wilde not the Oscar of Jaka's story that makes it odd. It is a harrowing story about Death from natural causes and how horrific this way of death truly is. this story is framed within crebus sitting in a portch of a cafe observing life in the cirinst regime.

Flight.
Cerebus returns from his funk in a murderous rage. While Cirin tries to keep the peace long enough to make an ascention into heaven. Cerebus reaches new levels of awarness and a counter movment of women to cirinsts make a move for power. this book returns cerebus to a more exciting storyline but also sets the grim tone for the second half of the series.

Women.
This Book explores the contrary points of view of the Cirinists (the Matriarchy) and the Kevillists (sims rendition of 1970's femeinists). the final ascention is Going terribly wrong and the kevillists make their move all to be stopped by a power beyond them all. In this book Sim is the climax of the cerebus story where sim reaches the apex of the conflict in Estarciion.

Reads.
This is the most controversial book in the crebus series. composed of a large fight between cirin and Cerebus and even larger prose peices. six of which are an allegorical story of a Reads (comcis) author. The second being Dave sims first essays on the world as he sees it. these Essays culminate in his thesis statement that basically states that Femenism is the root of everything wrong in our society. In his rhetoric He borders on true Mysogyny (SP) and he has lost many readers for it. Allthough I do not find him a misoginist, nor do I agree with many of his claims either, there is good argument for it that can be found on many websites. I urge you all to type in Dave sim's reads #186 on google (trust me you'll get hundreds of hits) and decide for yourself instead of taking my word for it. Also in this volume the mystery of the Aardvarks is revealed.

Minds.
In this the culmination of mothers and daughters, Cerebus meets his creator and has many questions answered. and the bad guys win.

Guys.
In this novel Cerebus spends the next ten years of his life in a bar. It really is much better than it sounds. this exploration of lonliness is I believe the finest moment of the second half of the series.

Ricks Story.
this the second short story of the Cerebus cycle is pretty much the culmination of Guys. Jaka's ex husband rick comes back into cerebus' life and decides that cerebus is a prophet propelling him to create a religion around cerebus. Cerebus has his final meeting with his creator and is reunited with Jaka.

Going home. vol 1.
reunited with Jaka Cerebus Decides to take her back to his home town. and life together is not all it's cracked up to be. this book features Sim's rendition of F. Scott Fitzgerald (F. Stop Kennedy)And explores the distance between men and women.

Going Home Volume 2 Form and Void.
Things get worse between Jaka and cerebus on the last leg of his trip home. Until The differances between the two leave tham in shambles when home is not what he expects. this book features Sims take on Earnest Hemmingway (ham Earnestway). And the two books that make up Going home are the coldest most distant volumes of the cycle.

Latter days.
As the name indicates this novel is about Cerebus's age and decline it is split in two parts latter days and the last day.

Latterdays volume one.
After spending twenty odd years first as a shepard then as a pro athelete. cerebus is apprehended by the founders of the cerebite church the three wise fellows, and obsessive adaptation of the lives of the three stooges. through this influence cerebus rids Estarcion of Crirnism (or does he). he then meets a character based on woody allen that gives him a scroll of the torah. Which Sim spends the remainder of the book reinterpreting in his own way. let's just call it unique.

the last Day.
in this final volume we get a portrait of old age and infirmness through cerebus' final day of life. we will never know what sort of afterlife cerebus enters but my guess is that it isn't a good one.

Cerebus is a brilliant work allthough flawed in many parts. mostly due to it's size but it is a series that I believe everyone should read once in their lives. It begins funny and ends bordering on the infuriating. I felt like giving up a t many points along the way but I feel rewarded by sticking in there.


www.followingcerebus.com and www.cerebusfangirl.com these are the finest cerebus sites on the web.

The Art above is one of Sim Gerhard's recent colour page recreations. it is of a page in High Society. The original was in black and white. But the replocation is stunning considering the change in the artists styles over the years.
Posted by David Arroyo at 3:14 PM

David Arroyo
I write and draw the comic series "the Super Cliche Hero Chick". And I wrote and drew the Web Comic "Neuropsychiosis". I am also an illustrator of children's books.